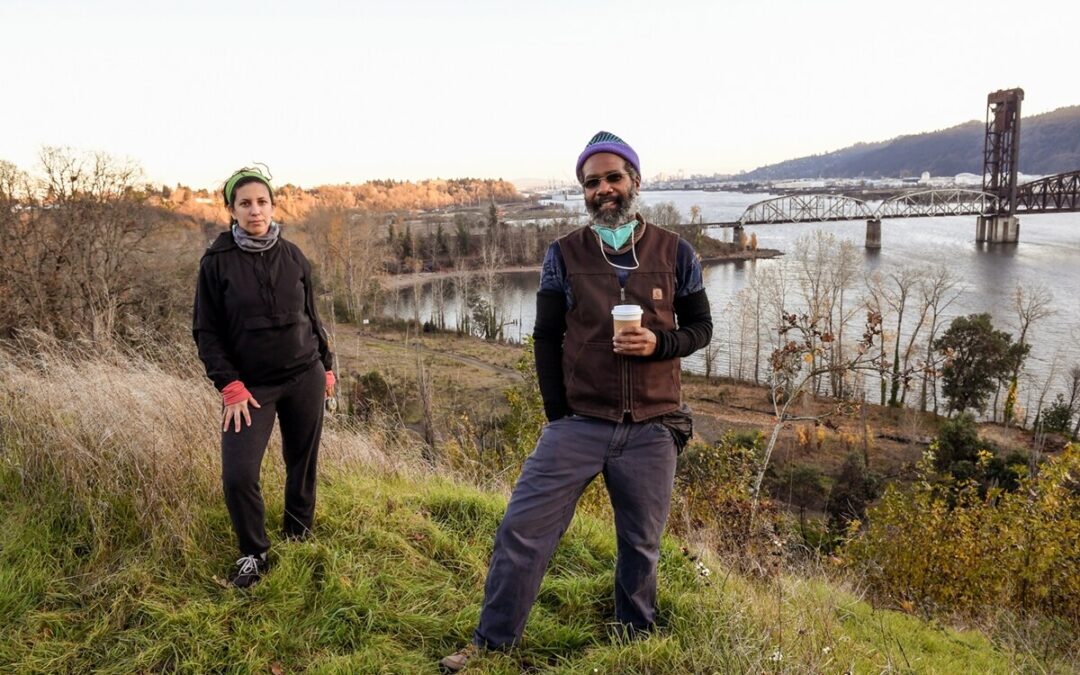 On sunny days, Michael Pouncil likes to stroll past the warning signs posted along Willamette Cove and tramp through what he hopes will be Portland’s next great waterfront park.

For Pouncil, the 3,000-foot stretch of beach in North Portland, owned by regional government Metro, is an oasis: a place to hike in dense woods or spy on the rafts of aquatic birds bobbing offshore.

“This is a slam dunk,” says Pouncil, who lives nearby and chairs the Portland Harbor Community Advisory Group. “Why can’t we have access to the river like Oaks Bottom or Poet’s Beach? This could be a beautiful site—a feather in the cap for Metro and for the city of Portland.”

But Pouncil only goes to Willamette Cove wearing boots. And when he returns home, he rinses the boots and keeps them outside.

The soil of Willamette Cove is soaked in dioxins, PCBs, heavy metals, and other toxic chemicals.

In 1996, Metro bought the 27-acre parcel, once the site of a plywood factory and, for most of the 20th century, home to a Port of Portland dry dock where ships were repaired. After 40 years lying fallow, the site is finally poised for cleanup.

But the recommendation from state environmental officials would result in far less than the park Pouncil and his neighbors want.

That option would cost $8.8 million and keep much of the property, including the beach, fenced off from the public forever.

Advocates, such as Portland Audubon, the Yakama Nation, and the Portland Harbor Community Coalition, say it leaves toxic waste in a floodplain and the soil would liquefy in the event of an earthquake. (Floods in Houston in 2017 scoured several dump sites capped in the way DEQ suggests.) And the agency’s plan would require monitoring to keep people away from contaminated areas.

Advocates say Metro could have steered DEQ toward full removal of the waste but is determined to go with a cheaper option that provides far less public benefit. They point to a confidential agreement between the port and Metro that governs cleanup costs.

Metro Council President Lynn Peterson acknowledges her agency has a confidential agreement with the port (which the port also acknowledges and WW is seeking to obtain under the Oregon Public Records Law), but Peterson says she is looking forward to engaging with the community on its vision for the site.

“We need to open that engagement process up and cost out the full range of opportunities,” Peterson says.

The advocates have urged that DEQ and Metro instead truck all the contaminated material to an offsite landfill, which would make the whole property accessible, rather than just small parts of it. Cost, according to DEQ: $10.7 million.

The big moment: Dec. 10, when the Metro Council will consider whether to make Willamette Cove eligible for some of the $475 million voters approved in November 2019 to improve and maintain the agency’s 17,000 acres of greenspaces.

Advocates are pushing the council to go for a full cleanup, which they say would acknowledge the reality that people will use Willamette Cove heavily, regardless of whether Metro buries the toxic waste or removes it.

“This is the chance to get it right for the long term,” says Cassie Cohen, executive director of the Portland Harbor Community Coalition. “Willamette Cove can be cleaned up for perpetuity—or left dirty for perpetuity.”

Like a post-industrial Stonehenge, Willamette Cove is sandwiched on the east bank of the Willamette River between the Burlington Northern Santa Fe Railway Bridge and the St. Johns Bridge.

The once vibrant industrial property is today a wasteland, partly reclaimed by oaks, madrone and cedars. Along the shore, tangled concrete support beams and skeletal dock pilings hide under blackberry bushes and other vegetation.

Signs tell neighbors to keep out. They come anyway, walking their dogs, fishing from shore, and even sleeping on the beach when there’s no other place to go.

In 2000, the U.S. Environmental Protection Agency declared the 10-mile stretch of the Portland Harbor running north from the Broadway Bridge to the Columbia Slough a Superfund site. The cleanup of Willamette Cove is part of that process.

For the two decades since, the parties responsible for polluting the riverbed—corporations, many of which no longer exist; government agencies, such as the city of Portland and the port; and their insurers—have wrangled with the EPA over how to clean up the mess that a century of industrial use left behind.

The 20 years has brought little benefit to Portlanders. For much of the past two decades, they have absorbed a charge on their water bills for the city’s share of what EPA finally decided last year will be a $1 billion cleanup.

That cleanup will be largely invisible. Nearly all the affected land is underwater, and the upland portions remain in the hands of industrial owners or the Port of Portland. (DEQ is overseeing the upland cleanup, which is proceeding in parallel with the federally regulated in-water cleanup.)

Willamette Cove is one of the few affected pieces of riverfront land in public ownership—and it’s in a neighborhood that has long borne the brunt of Portland’s heavy industry.

A social justice issue is also at play. Among the parcels in Metro’s greenspace portfolio are heavily used public lands, such as Oxbow and Blue Lake parks. But few of agency’s parks are located in urban areas, even though Multnomah County is the biggest source of funding for the agency.

Metro nodded to that disconnect when it presented the 2019 parks bond to voters. The measure was aimed in part at improving properties it purchased with previous bonds in 1996 and 2005—and to right historic wrongs.

“Racial equity is the core of the bond measure,” Metro told voters. “It prioritizes outcomes that benefit people of color, Indigenous people, people with low incomes, people with varying abilities, and other historically marginalized groups who have not benefited equitably from past investments.”

But cleanup advocates fear what Metro wants would provide little more than a bike path and a few walking trails: far less than the vibrant waterfront park they envision.

“What they’ve proposed is going to be restricted and dangerous,” Sallinger says. “There are no playgrounds, no picnic areas. That doesn’t work.”

Peterson says Metro did not, as advocates fear, steer DEQ toward the cheaper, less thorough cleanup. All options are on the table, she adds, even though DEQ is expected to release a final cleanup plan in the first quarter of 2021.

“I’m just excited that we are able to move this forward and make it eligible for bond funding,” Peterson says. “We are committed to meeting racial, social justice and climate resilience goals.”

Pouncil wants everybody to get a chance to see what he sees at Willamette Cove.

“This is an environmental justice issue,” he says. “In North Portland, we only have one access to the river and that’s Cathedral Park—which is contaminated, as well. Doing this right should be easy.”